IPCC experts consider that buildings offer the largest share of cost effective opportunities for GHG mitigation among the sectors examined by them [1]. However, achieving a lower carbon future will require very significant efforts to enhance programmes and policies for energy efficiency in buildings and low-carbon energy sources well beyond what is happening today.

In their reports [2], the main focus is put on the operation energy, the energy to heat and cool buildings, because for typical standards of building construction, the embodied energy is equivalent to only a few years of operating energy. Over a 50-year time span, reducing the operating energy is normally more important than reducing the embodied energy.

However, for traditional buildings in developing countries, the embodied energy can be large compared to the operating energy, as the latter is quite low. Furthermore, the emissions related with the construction of the building will be released in the beginning of the life cycle of the building while those related with operation will be released over the life cycle which in developed countries is often assumed around 50 to 60 years. This time period expands well beyond 2050 which means that a part of the operation emissions does not count in the carbon budget until 2050 but in the later consideration of the 1ton CO2 per capita. Finally the embodied energy is also the part of the energy required for a building that is the most difficult to reduce.

In the current paper, we evaluates the pertinence of the sustainability target implemented in the building sector compared to the global target fixed at the COP21 and considering the future perspective of urbanization growth in the next decades.

As the most constraining target, we considered the energy label promoted in Switzerland as the so called 2’000W society. The vision of this energy efficiency path is that every person would consume not more than the energy corresponding to a continuous power of 2’000W. This budget can be used for all human activities: housing, mobility, food consumption the construction of all infrastructure sustaining human activities and other consumption pattern. The efforts to reach this goal are enormous since Switzerland is currently consuming around 7’000 W pro person. Concerning the built environment, this consumption pro person can be translated in a budget pro square meter assuming a given square meter per capita and is separated by guidance value between the different sectors related to the built environment: the energy to build houses, to operate them and to move from the building that has been built to his work. These guidance value for the three sectors have in fine to be lower than the target value and new construction as well as renovation project can be compared to these target values (table 1). 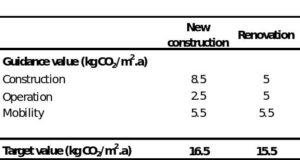 To answer these questions we considered different housing qualities which have already been evaluated in previous studies. We considered the embodied energy of an average post disaster reconstruction house to be able to evaluate the lowest quality standard that international organisation would recognise for housing. The data are coming from the average of 20 post disaster houses done by the red cross[3].

The current Swiss construction is used to test the consequence of a worst case scenario from the environmental perspective, if everyone is building like this[4]. The 2000W society target is considered to be the current sustainability goal.

Finally, we considered a bamboo-based construction in order to include the potential carbon sequestration represented by bio based construction [5]. It has to be noted that not the whole house is made with bio-based materials and therefore positive CO2 emissions are also recorded but the total CO2 emissions is negative. This provides us with data for 4 housing types shown in table 2.

As the service life of all the construction type is obviously not the same, it is important to consider the replacement of each house at the end of life. The figure below is illustrating this concept. For the bio-based house, we considered at the end of life that all the bio-based materials are burnt which release in the atmosphere the carbon stored. However, the new house that replace the old one is storing again carbon. No avoided impact is included in order to be able to quantify the real CO2 release. These assumption are very first approximation as the dynamic of carbon storage in timber construction is more complex. However, as this paper’s aim is to provide a rough estimation of the challenges and open research direction, we believe that these assumptions are reasonable. For further reading on carbon dynamic in timber, one can read [6]. 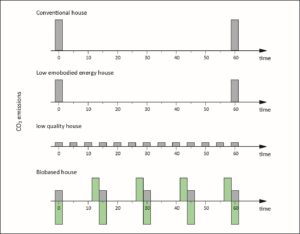 The result in term of carbon emissions over time extrapolated for these four housing type, is schematized in the figure below. The main interest is to highlight that a low quality house that has to be refurbished very often might in time release a non-negligible amount of CO2. Similarly, the non-bio-based materials which are part of the bio-based house contribute to regularly reduced benefits of the initial carbon storage. This has large consequence on the way we design timber or bamboo based houses. Actually, the concrete part of these houses (for slabs and foundation) can annihilate all benefits of the bio-based materials. This is the case for current timber construction in Switzerland (see Heeren[7]).

However all these considerations are based on a system boundary where the environmental impact of one single house are assessed over the next 60 years. One can expand these system boundaries to the assessment of the total built environment that will be used and built from now to 2050.

The International Energy Agency recently drew some perspectives on the future built environment considering scenario of GDP growth and associated comfort level per capita (nb person/household, m2/cap,…). Table 3 is summarizing these results and provides a value for the global residential floor area to be built and maintained over the next forty years.

The consequences in term of CO2 emissions for the total built environment from now to 2050 are shown in table 4 and 5.

The table 4 shows the emissions related with the construction and maintenance of the buildings. A renovation rate of 2% per year of the existing built environment, has been considered.

Table 4:CO2 emissions for the construction and maintenance of the built environment from now to 2050

The table 5 shows the emissions related to the operation of the built environment from now to 2050. For the calculation all built square meters have been considered to be either heated/cooled at a level of 2.5 kg CO2/m2 which is the highest efficiency level for the 2’000W society standard or at 25 kg kg CO2/m2 which is the average CO2 emissions of European residential sector.

Table 5:CO2 emissions for the operation of the built environment from now to 2050

We can compare the total emissions calculated for the built environment on table 4 and 5, to the maximum CO2 release of 160 Gt which correspond to 20% of the 800Gt budget given to have 66% chance to stay below the 2°C target. Table 6 shows the final results.

Table 6: Final results. Total CO2 emissions for the built environment from now to 2050 considering construction and operation of residential buildings. Different building typologies for new construction and renovation are considered as well as different energy efficiency standard for operation. Green represent value that allow to stay below 2°C target (66% chance).

As a main conclusion, one can state that the Paris agreement target cannot be achieved with the highest energy efficiency standard of current green buildings (2000W society).

The simulation that has been done is extremely simplistic. Among the main issue, one can highlight the lack of dynamic assessment of the stock and its transformation over time, the consideration of the informal sector and the calculation on the heating/cooling demand.

The evolution of the square meter built has been modelled with macro-economic data. However, one can observe transformation of the building stock without increasing the number of square meter. For instance, the massive urbanisation is translated by the fact that a rural building stock is abandoned and that a new urban one is built. This has been studied for instance in China (Yang and Kohler, 2008). This transformation has been considered only by considering 2% renovation of the building stock every year, which is more characteristic of an already urbanised building stock that is then maintained and transformed. As a consequence, the impact linked with the new construction is underestimated in our model.

The modelling of the square meter requirement is done with country specific GDP value and average trend and relationship between square meter requirement per person and GDP. This makes the hypothesis of the pertinence of an average value per country while it is clear that this hide very large diversity/inequalities between people. For instance, this modelling is probably not extremely accurate when assessing the informal sector. There is then probably more square meter built, but in poor quality.

Those two simplification of the model tends to lower the impact of the construction. On the contrary the hypothesis that has been considered for the operation of the building overestimates the consumption. We have actually considered that all square meter built would need the same energy consumption than European while most of the population leaves in climate where the need for heating and cooling is lower and where the level of income does not allow to heat or cool all the square meter built. The operation energy is then probably overestimated.

Considering the total built environment and its associated emissions from now to 2050 gives a radically new perspective:

The current trend in construction is leading to a trajectory that is way beyond the Paris agreement target and even the strongest sustainability standard of the 2000W society do not fulfill the target.